Tell your friends! And please go to our Patreon page to join the Dream Tower Crew:
https://www.patreon.com/LiteraryWonderAndAdventure

Thanks!
Robert and Edgar 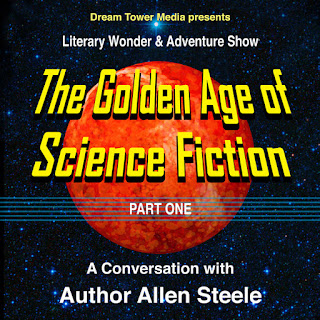 Posted by Robert Zoltan at 2:16 PM No comments:

Some exciting things happening in the coming months in the Dream Tower! 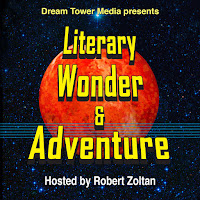 September: Lest Darkness Wreck the Stars
Poet Swordsman Dareon Vin and his Indari Warrior comrade Blue return in another Fantastic Full Audio Fantasy Adventure!
From the Rogues of Merth series by Robert Zoltan.

Subscribe to the Dream Tower Media newsletter for further exciting announcements!
www.dreamtowermedia.com. And please join the Dream Tower Team and keep the show going monthly by pledging on our Patreon page: https://www.patreon.com/LiteraryWonderAndAdventure

Thanks!
Robert and Edgar

Posted by Robert Zoltan at 3:52 PM No comments:

Shooting Myself (The Making of a Princess of Mars, Week 8)

That’s what I feel like doing sometimes during this project. But this morning I did it in a less destructive way—with a camera. I shot 125 photos of myself for illustration photo reference (behold the glamour of illustration modeling!). Tiring not only because action scenes are difficult, but also because I have to set timer, pose, shoot, then go and check the shot to see how it looks, adjust my pose to the drawing, shoot again, repeat. 125 times. Regarding my process, I don’t usually come up with ideas, shoot reference and then illustrate that. I do drawings and then shoot reference afterward to improve detail and work out difficult anatomical problems. I shot some good stuff, mostly for A Princess of Mars, but also for the cover of Lest Darkness Wreck the Stars, the new Rogues of Merth: The Adventures of Dareon and Blue story. Coming soon from Dream Tower Media!
The first session with the Dejah Thoris model was postponed due to my cold, but I will be rescheduling that very soon. And if you’re really good, I might even show you a photo or two from that…nahhhhh!
Sincerely,
Robert Zoltan
June 19th, 2017

Posted by Robert Zoltan at 2:13 PM No comments:

Finally...Green Martians! (The Making of a Princess of Mars, Week 7)


The abstract drawing approach continues to yield results, and moves me ever closer to the specific feeling and style I desire for the book.
I was recently hit with a cold, and was unable to draw yesterday, but felt well enough this morning to pick up the pencil again. I worked in a smaller format frame, about nine by twelve inches, and this is what happened. 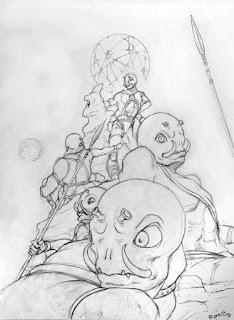 After five or six attempts at drawing the Green Martians in the last few weeks, I finally nailed the essence of what I was trying to capture. The Green Martians are difficult to draw because, being true to Burroughs’ description, they can easily appear cartoonish or puppet-like. This time I was able to portray them as if they are actual living beings with distinct character and personalities, caught in a moment during a rest on a march across the desert. I also brought a rather slinking, animated feeling to the creatures, and the scene helped enhance this sensual, lazy, dreamlike vibe.
I hope you enjoy previewing this preliminary sketch. And I hope you like my portrayal of the Green Martians.

The Emperor’s No Clothes (The Making of a Princess of Mars, Week 6)

Of my many artistic decisions for this project, the subject of clothes and ornamentation remains a primary detail. In my ongoing study of Burroughs’ text for A Princess of Mars, I find that the idea of the Red Martians not wearing any clothes is not as straightforward as it may seem, though it seems to be one believed my many readers. My fellow Burroughs’ fans, I refer you to three excerpts from the manuscript: 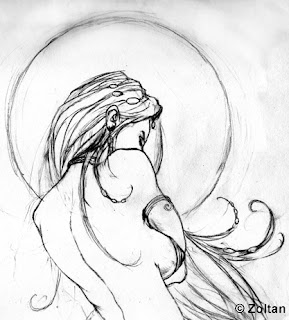 “She was as destitute of clothes as the green Martians who accompanied her; indeed, save for her highly wrought ornaments she was entirely naked, nor could any apparel have enhanced the beauty of her perfect and symmetrical figure.” (Dejah Thoris, Chapter 8)
Perhaps Burroughs was referring to only Green Martians and Dejah Thoris at the time of her capture when he stated that they were without clothes. He evidently was not referring to all Red Martians, for later, we read:
“Again no Martian interfered with me, and tearing a piece of silk from my cape I endeavored to staunch the flow of blood from her nostrils.” (John tending to Dejah, Chapter 10)
And…
“The chill of the Martian night was upon us, and removing my silks I threw them across the shoulders of Dejah Thoris.” (John caring for Dejah, Chapter 13)
So, in effect, some Red Martians did wear clothes at times. Perhaps they did at night when the temperature dropped, and surely in the regions nearer the Poles. Or, Burroughs did not consider the word apparel to cover capes or what seems to possibly be a silk wrapping of some type, perhaps similar to a toga. Or perhaps he simply loosened the idea of clothing as the novel went on. Who can say?
Fortunately, this ambiguity serves me as an artist, allowing me to stay true to the novel while granting me license to do what will best serve the visual images!
Sign up for the Dream Tower Media mailing list to make sure you don’t miss a single entry of this ongoing story.