Robert Zoltan and Edgar the Raven Hit the Big Time 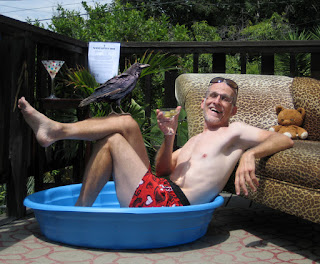 According to Dream Tower Media’s publicist, the star host and star co-host of Literary Wonder & Adventure Show have “hit the big time.” Supposedly, the show’s popularity is “raging like a Southern California wildfire.” Thanks to several corporate sponsorship deals, merchandising, and numerous lawsuits, Robert and Edgar are reported to have “bought a villa overlooking the Hollywood Hills.” Pictured here on the terrace in a photograph by famed photographer, Lannie Eibowitz, Robert and Edgar relax in their pool (an unidentified famous associate lounges on the authentic leopard skin chaise lounge), drinking Martini’s, and eliminating potential guests from their list for upcoming episodes.

Robert and Edgar both have book deals in the making and the publicist claims that a movie deal is “ludicrously inevitable.” Robert’s book is a biography entitled, “All You Need Is Love (and Talent, and Sex, and Money), while Edgar’s book is a how-to for other avian sidekick hopefuls called “How to Fly to the Top Without Losing Your Tail Feathers.”

Rumors of friction over money and creative differences (but mostly money) are dismissed by the publicist, who claims, “Robert and Edgar are a dynamic duo like Batman and Robin, but without the costumes, the crime-fighting, or the homosexual undertones.” Despite this assurance, an inside source claims that Robert and Edgar now record their audio parts for the show at separate times in the studio. As for Robert’s purported drinking and depression problems, the humble host addressed this directly in a recent Facebook post. “Gin is nothing more than a drink to me. And how could I be anything but happy? I’m living a life that common people can only dream of.”

For more gossip, scandal, offensive news, and the latest about the show, sign up for the Dream Tower Media newsletter and listen to Literary Wonder & Adventure Show at http://www.dreamtowermedia.com/podcast.
Posted by Robert Zoltan at 9:04 PM No comments: 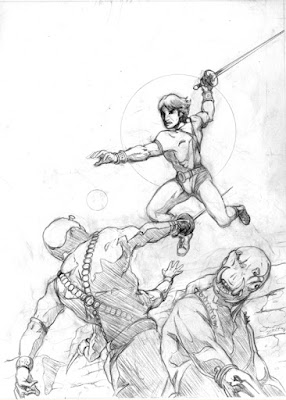 My daily work on A Princess of Mars is yielding great results. I am now up to about sixteen compositions that will probably work out for inside illustrations. So why have I been remiss on keeping up with the blog, and even more, why am I not showing you the work?
I am facing the dilemma of the classic striptease artist: What to show, what not to show? If I show too much, I risk lowering the value of the book for those who will purchase it when it’s released, and also for those who will support the upcoming Kickstarter for the project and get behind-the-scenes extras. Additionally, I am still developing the style of the illustrations, so I don’t have too much that I feel is surely representative of the final look.
Of course, if I show nothing, I risk losing people’s interest. Oy!
I promise I will reveal more as I am able, and if I am not revealing much, it is in the interests of the book itself and those who will be fans of this book. I can only ask for your faith and patience, and for this post at least, leave you with a little “glimpse of leg” that promises to make it into the final edit of the book.
Sign up for the Dream Tower Media newsletter to get the latest updates.
Kaor!