Judging People of the Past by Modern Morals

I have read many judgemental criticisms of people of the past, including writers and their characters, such as fantasy writers Robert E. Howard, Fritz Leiber, and Jack Vance. If we judge people (and characters) of the past from our self-righteous 21st Century moral stance, we have to give up just about all heroes, including Gilgamesh, Lancelot, most of Shakespeare's heroes, Buddha (who left his wife and responsibilities), and even Jesus (who left is responsibilities and hung out with whores and traitors). No one can stand up to those standards if a light is shined upon every aspect of our lives. A hero is not someone who is flawless. A hero is someone who does great, courageous, or honorable things despite their flaws.

Judging people from the past (or even in the present) is a false way to make ourselves feel superior to others. A more honest action would be to ask ourselves: what have WE done, and what are WE doing with our lives?
Posted by Robert Zoltan at 10:56 AM No comments:

The Fate of a Princess

When I began the Princess of Mars project,
I was under the impression that Edgar Rice 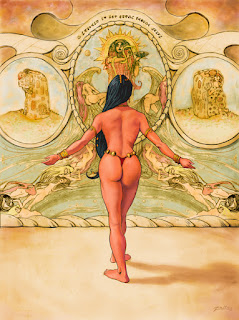 Burroughs' A Princess of Mars was in public domain, and could therefore be published by anyone. This assertion has recently been questioned. I have contacted Edgar Rice Burroughs Inc. in order to find out more information on this matter, and hopefully to get not only their permission, but their endorsement of Dream Tower Media's Illustrated version of the novel.

Until I receive word back, the project will be on hold. If the work is still under copyright and I am unable to get the permission of ERB Inc. to do the project, I am afraid it will not be brought to completion and published. Dream Tower Media will then move forward instead with the other books planned for its publishing line. I will keep you all up to date on any news I receive.
Until then, I am releasing another one of my illustrations for A Princess of Mars, still in process of editing, but nearly finished as a piece. This is the scene where Dejah Thoris looks in wonder at the fresco of an ancient lost people. The fresco is a tribute to my favorite artist, Gustave Klimt.
Thanks to everyone who has been patient and supportive.
Best Wishes,
Robert Zoltan
October 6th, 2017
Posted by Robert Zoltan at 2:17 PM No comments: