Literary Wonder & Adventure Show was just nominated for a Robert E. Howard Foundation Award! It was also recommended by top editor Rich Horton for a Hugo Award! And if that's not enough, Episode 10 is now live! Premiering another full audio drama of those two reluctant adventurers, the poet swordsman Dareon Vin and his Indari warrior comrade known as Blue.
ROGUES OF MERTH: DELTA OF THE DAMNED
A thrilling sword and sorcery adventure!
(and, if you missed it, Episode 9 is still available—Clark Ashton Smith, Poet of The Fantastic: A Conversation with Author Ryan Harvey)
http://dreamtowermedia.com/podcast/ 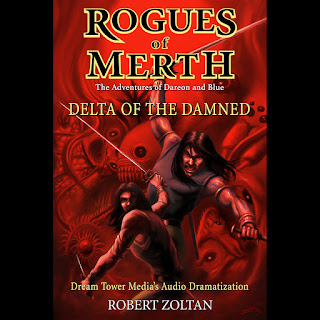 Posted by Robert Zoltan at 3:03 PM No comments: