The Missing Myth in Modern Fantasy 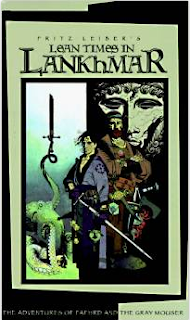 In Howard Andrew Jones' blogpost, he and Bill Ward discuss Leiber's brilliant tale "Lean Times in Lankhmar, and mention the fact that the character Fafhrd, who appears in the guise of a god, tells his comrade the Mouser that for a moment, he really was that god. This is an incredibly important point not only to this story, but to Leiber's writing in general, as well as some of the other great writers from that golden era of the early to mid twentieth century.

Leiber had an understanding of myth. I don't know if it was mainly from his own reading of myths, Jung and/or Joseph Campbell. What happens to Fafhrd is a mythic event. He is not the god, but he becomes the god for a moment, in a sense. He is a manifestation of universal, eternal forces that are also psychological ones in the human mind. By having Fafhrd claim honestly that he was the god, Leiber maintains mystery, which is the one constant truth that we experience of reality.

I have previously bemoaned before the loss of mystery in fantasy fiction, but it is a problem not just in fiction but with our modern Western society. Notice how the term myth has been changed to mean "a lie." But a myth is actually closer to the opposite. A myth is a metaphor that points to something other than itself, and that other thing is usually some primal truth about reality and the human condition in relationship to that reality. But fundamentalist scientific materialism says everything is either true or false, but what it means is that everything is either a FACT or a LIE. The terrible error in this thinking is that fact and truth can be two different things. This materialistic thinking is, ironically, also found in fundamentalist religion, the most anti-spiritual type of religion that exists. Fundamentalist religious people are so desperate to believe in only facts that they try to claim everything in the Bible isn't just truth, but also a fact (and they claim this despite the contradictions and unbelievable improbabilities in the scriptures). When you remove mythology from religion, all you're left with is a bunch of unlikely stories and bad science.

In most modern fantasy stories (and art), everything is explained. Everything is a fact. Magic systems are explained. Monsters are explained and described in minutest detail. Heroes are too cocksure and in control of their actions. The lack of mystery goes even beyond the content of the stories to the writing itself, which often reads like a Hollywood action film, not literature. Almost no sense of true mystery exists, meaning mystery in the large sense. Another term that could be used is numinous, which is a term coined by Rudolph Otto.

“it has three components. These are often designated with a Latin phrase: mysterium tremendum et fascinans. As mysterium, the numinous is "wholly other"-- entirely different from anything we experience in ordinary life. It evokes a reaction of silence. But the numinous is also a mysterium tremendum. It provokes terror because it presents itself as overwhelming power. Finally, the numinous presents itself as fascinans, as merciful and gracious.” (http://www2.kenyon.edu/Depts/Religion/Fac/Adler/Reln101/Otto.htm)

Joseph Campbell referred to this materializing of everything, in the religious sphere, as “concretization.” Symbols are now considered more important as historical facts (Noah really DID fit all the animals in an ark, etc.) and thus have lost their mythic symbolic power, which is where all the meaning lies, and which is what can transform individual lives.

Campbell referred to it, in the artistic sphere, as naturalism.

“Naturalism is the death of the art. And that’s one of the big problems in our American arts, I think, they don’t understand the metaphor. It’s all naturalism.”
“This naturalism in our art world is…all flat-footed prose. And in flat-footed prose there are only two things that are interesting: violence and sex. That’s what it’s come down to. Everything leads up to it and out of it.”

And, that’s what we mostly have in modern fantasy stories. I seldom read anything written after 1980 or so, because it’s all naturalism, all movie script violence, prop room costumes and action oriented plots. But I took the time to read Howard Andrew Jones' novel, The Desert of Souls, and enjoyed it. I think he was able to weave some sense of mystery into that book, some sense of the numinous, of the ancient and unknowable. And what first drew me to it was the original cover by Charles Keegan. That painting wasn’t some posed models or, worse, Photoshopped photos, and it didn’t look like some cheesy movie poster. A sense of mystery pervades the picture in every way: the composition, the colors, the setting, the painterly style. The numinous glowed forth in that painting. The cover, and the story inside, reflected the unknowable, the mysterious. They were, at least a bit, transparent to transcendence (a term coined by Karlfried Graf Durckheim), meaning that the myth, the divine life within you shines forth.

That is what we should seek to do as human beings, and especially as artists. We should seek to create work that is transparent to transcendence. And Leiber’s work, at its best, was. 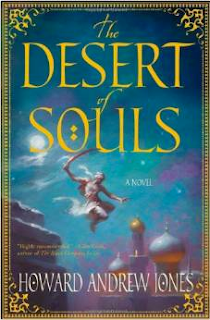 Posted by Robert Zoltan at 4:50 PM